The nominees for this year's Agatha Awards have just been announced. 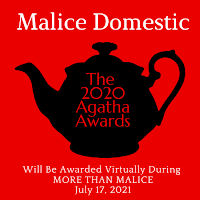 Now I'm a neophyte in this area, and of course I would not even be eligible for consideration until next year (I should be so lucky), so no knots in my stomach this year. But this is award season for mysteries: the king-daddy of them all, the Edgars (named after Edgar Allen Poe, and if I have to tell you who the Agathas are named after, your disinterest in mysteries is profound), has announced their nominees already, and you can find them here.
Here's a little bit about Malice Domestic, the folks who award the Agathas.

"Established in 1989, Malice Domestic is an annual fan convention that takes place each year in Maryland, just outside of Washington, D.C. Malice celebrates the Traditional Mystery, books best typified by the works of Agatha Christie. The genre is loosely defined as mysteries which contain no explicit sex, or excessive gore or violence."
So why should you care? Well, you're always looking for reading recommendations, aren't you? And why should I care? Because James Ziskin, my Seventh Street stable-mate and an all-around mensch has had his Sherlock Holmes pastiche, “The Twenty-Five-Year Engagement,” has been named a finalist for the Agatha for Best Short Story. So I've got someone to root for.

And you can find the book here, So you'll have someone to root for, too.