Do You Know This Man?

Of course you do. You've seen this picture of him in every tasteful little coffee-shop or bistro you've ever frequented. It's so ubiquitous that it's almost invisible. And there's his name right on the poster, Aristide Bruant. French guy, right? 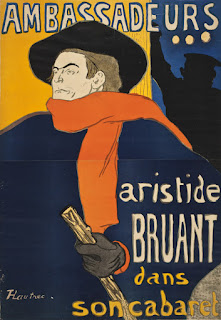 You might even know that the poster is the work of Toulouse Lautrec, the little guy, the godfather of posters.

But do you know Aristide Bruant, who was anything but tasteful? As a matter of fact, he was the Andrew Dice Clay/ Ozzie Osborne of his time. He was an outlandish cabaret owner whose main attraction was himself, entertaining his customers by parading on the bar top, singing and insulting everyone who came to see him, and everyone was the bourgeois, slumming it up in dangerous Montmartre (or La Butte, as the hilly region of Paris was called). And the bar he packed them in at was The Mirliton.

The Mirliton, which basically means "the kazoo" in French. It's also a favorite vegetable in Cajun cooking, which caused me no end of trouble along about the third draft of The Strange Case of the Dutch Painter. 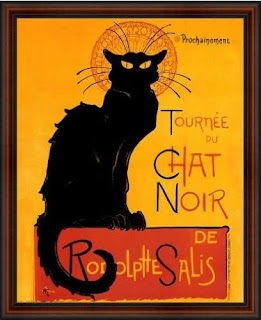 But maybe we'd better back up, to the bar where Bruant made his name:

Le Chat Noir in Montmartre, the ur-nightclub, which I know you've heard of, because once again, you've seen the poster--probably in that same cool little bistro, just across from the poster of Bruant. Bruant became so well known there that when the club closed, he opened his own--at the very same site. The walls were decorated with Lautrec's masterworks, which the bourgeois crowd mainly ignored. Lautrec held court there most nights--until some place The Moulin Rouge opened up down the street.

Here's how I imagined the place:

This then was the Cabaret Le Mirliton, just one of several down-at-the-heels establishments pocking the Boulevard Rochechouart that promised song and dance and bonhomie, or alternately enough noxious drink to make the first three superfluous.
Le Mirliton was of the first kind. As soon as we were inside the door, we were greeted by smoke and noise and the booming voice of the proprietor himself.
“My God, look at these two! Have the sewers backed up all the way to Montmartre?”
There was Bruant, striding up and down the top of the bar in the same costume we’d seen in the posters, a gamekeeper’s outfit with a scarlet shirt and scarf, an opera cape and wide-brimmed black hat. He pointed a rattan cane at us and said, “See how they gawk? Like sheep about to be sheared! Mutton-heads!”
Interior of Le Mirliton by Louis Anquetin 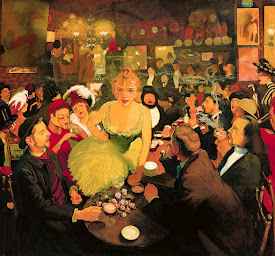 St. Lazare, a song by Bruant