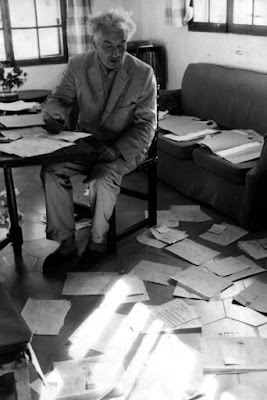 The Devil’s Advice to Storytellers
Lest men suspect your tale to be untrue,
Keep probability – some say – in view.
But my advice to story-tellers is:
Weigh out no gross of probabilities,
Nor yet make diligent transcriptions of
Known instances of virtue, crime or love.
To forge a picture that will pass for true,
Do conscientiously what liars do –
Born liars, not the lesser sort that raid
The mouths of others for their stock-in-trade:
Assemble, first, all casual bits and scraps
That may shake down into a world perhaps;
People this world, by chance created so,
With random persons whom you do not know –
The teashop sort, or travellers in a train
Seen once, guessed idly at, not seen again;
Let the erratic course they steer surprise
Their own and your own and your readers’ eyes;
Sigh then, or frown, but leave (as in despair)
Motive and end and moral in the air;
Nice contradiction between fact and fact
Will make the whole read human and exact.
—Robert Graves
By Timothy Miller at 8:31 PM