This page is dedicated to "a little something extra" which will change from time to time according to the prevailing winds. It might be a humor piece or an essay or a poem, or a rant, or a fairy tale, or all of them mixed together.

IN THOSE DAYS, when the King of Naples wore a red beard and conversed with his birds in pure Arabic, there were born twin sons to a merchant of Amalfi. (Today we would say that they were born to the wife of the merchant, but the coarser details of life were glossed over in those days.) They were beautiful green-eyed, golden-haired boys, such as one rarely sees in the south. The merchant (or his wife) named them Marco and Ottuno. Marco was the elder of the two, having been born a full five minutes before Ottuno. He took his responsibilities as the elder seriously. Having guarded his brother's entrance into the world, he felt it his duty to guard Ottuno's footsteps wherever he went. Ottuno accepted his brother's protection with equanimity and even a certain amount of noblesse oblige. Thus Ottuno grew up laughing and carefree, while Marco's brow from early on was a knot of seriousness.
Let's glissando past their childhood. The mother dies while they are young. The father, reduced by circumstances, dies as they are about to come of age, leaving his sons only two small casks of gold, and an admonition to go out in the world to make their fortunes. It was Marco's idea that they should travel together. It was Ottuno's idea that they should not. He sought livelier company than his brother had heretofore provided. They each took a cask of gold. Marco buried his in a secret place, keeping it against hard times ahead. Ottuno, recalling the parable of the talents, strapped his to his saddlebags and rode away cheerfully. 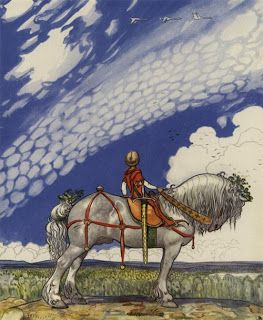 Which of the two brothers should we follow first? If we trail after Ottuno, we'll find tales of good food, strong wine, wild companions, and amorous women. It's an appealing thought. But if you want amorous adventure and fine wine, you can stop reading and slip down to the nearest cafe. Whereas, if you want to get as quickly as possible to the troll's castle (by following Marco), you must continue reading. So it's Marco we'll follow, in the interest of keeping an audience.
Ottuno had gone south. Marco headed north, into the teeth of the Apennine mountains. There he came upon an isolated kingdom, cut off from commerce with the outside world. He would never have found it had he been searching for it; he let his horse lead him there. It didn't look much of a kingdom when he first crossed its border: a hill path, a ramshackle old house perched on its shoulder. In front of the house was a well, and an old woman at the well, who bade him go no further. Her name, she told him, was Nonni Oscura. He could spend the night under her roof, then turn back the way he had come. Marco laughed at Nonni Oscura's dark intimations. He would be pleased to accept her hospitality, he said, but why should he not continue on up the mountain path in the morning? 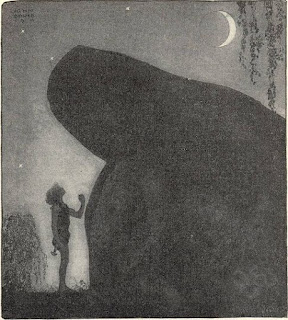 "See you where the road turns sharply east there, just ahead?" The old woman thrust a bony hand that way. "That's the boundary of the kingdom of Solinus, last of the troll-kings of Italy. He's gathered to himself all the great troll-clans of the peninsula. They rule the mountains, and their hatred for men is sharp as the north wind and bitter as the sea."
Marco knew the history of the trolls, of course. They had come out of Germany centuries ago, looting and burning and killing anyone and anything in their paths. They had sacked the great city of Rome. They had taken knives and hacked the last Roman emperor to death on his own throne, and dragged his body through the streets. Then they had divided Italy up into a hundred warring troll-kingdoms. The Italians are a patient people with foreign interlopers, but after a few centuries of subjugation, they had risen up, village by village and city by city, to overthrow the trolls. They had driven them high into the mountains, where their numbers dwindled and they were forgotten. Marco had never met a troll himself, but he remembered two points of gossip about them from the old wives of Amalfi: that they were fabulously wealthy, and that their daughters were scandalously beautiful. He managed to work both points into his conversation with Nonni Oscura.
It was true, admitted the old woman, and that, she said, was the devilry of the thing. If a man entered the realm of King Solinus, the troll-king himself would challenge that man to mortal combat. If he demurred, the man would go free. If the man slew King Solinus, then he would inherit his startling wealth, his astonishingly beautiful daughter, and his brutally fierce warriors. If he was defeated by the king, however, he was forced into slavery for the rest of his miserable life. No man had ever declined the challenge, and no man could ever defeat Solinus.
If it were the old woman's intention to discourage Marco from continuing forward into the troll-kingdom, it were far better she had never mentioned Solinus's challenge, or his wealth, or especially his daughter. Marco was set upon half the night by strange dreams of avarice and lust. He woke in the dark before dawn to the sound of the old woman snoring loudly in a corner. He saddled his horse in silence and rode away into the kingdom of Solinus.
At first his horse stepped nervously through a clinging fog, shoulder-high, but the first rays of sunshine tore at the white curtain till it was no more than tatters. On either side of the road stretched away the green bowl of a mountain meadow. There were men at work in the far fields, their shoulders bowed by heavy iron collars. Not one of them looked up as Marco rode by. In truth, they looked neither right nor left, up nor down, but straight ahead always. Marco thought disdainfully that they seemed hardly the kind of men to challenge the troll-king in single combat. He had already decided that he would make that challenge. In Amalfi he was considered something of a swordsman. The troll's proper weapon, he knew, wasn't a sword, but a stick.
As he neared the castle of Solinus, a craggy imminence that seemed bludgeoned out of the rock rather than built by hand, Marco began to come across trolls. They seems all horn and hide and bad manners. They at least noticed his passage, but with a sidelong, grimacing kind of squint, as if he smelled bad. But not a one of them acknowledged his salute, nor yet attempted to hinder his progress. Soon he came to the castle walls. A hundred trollish heads peered down at him from the black battlements. An immense shield twice the size of a man hung before the gates, displaying the arms of Solinus, the lion and the sun. He dismounted and struck the shield three times with the butt of his sword. It was not a ringing challenge, but a dull knocking, answered by laughter from above. The castle gates opened just wide enough to admit a man on horseback, then groaned shut behind him. 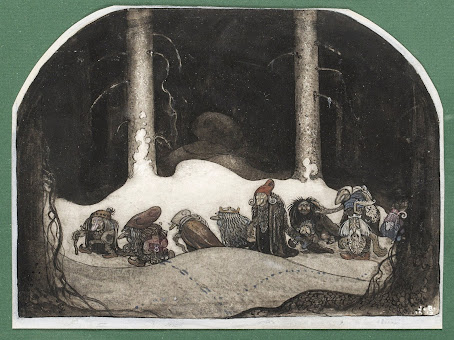 Soldiers bid Marco dismount and led his horse away. He would never see that faithful beast again. He was handed over to two guards. Courtiers they were, by their embroidered tunics and silken hose, but their legs were knotty as old tree-trunks and their faces were twisting into leering grimaces. They led him through the dark keep and down long, musty corridors until he came stumbling into the light. The chamber he found himself in might have belonged to the Grand Turk, so luxurious it was with tapestries and carpets and pillows. A man would have a hard time stubbing his toe in there. Marco was hustled across the room and made to genuflect before the throne. A huge troll with red eyes and curving tusks leaned down from the throne and placed his hammer-like hands on Marco's shoulder. This was Solinus himself. 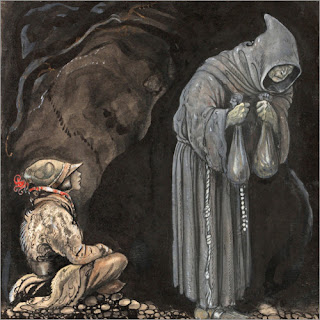 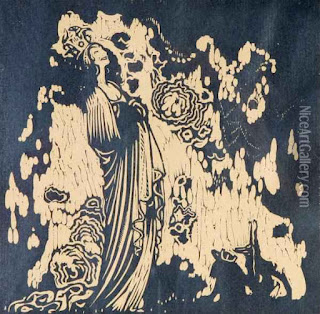 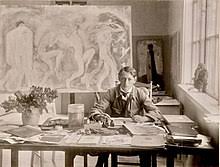 (all art by John Bauer) 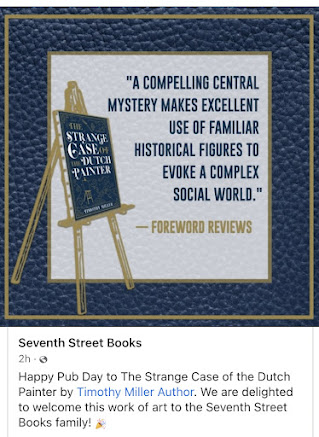 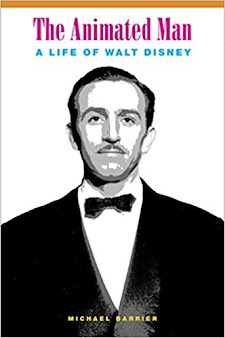 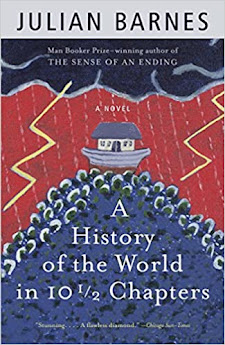