You say goodbye, and I say hello.

As an artist, which are you?

The raw or the cooked?

I mean, there are those artists who want to dig into themselves, confess themselves, use themselves as their source material. And then there are artists who hide behind their art, who use their art to please, to put on a hundred different masks. I think it's true no matter what medium you work in: writing, acting, painting, etc.

Of course art by it's very nature is a kind of hiding; even if it is a revelation, it's always at one remove. One can always deny it if questioned by Pilate. Yet it is also an invitation to follow the clues, no matter how tortuous or obscure, to the soul. So there's a dialectic involved.

I adore Lennon, but I'm definitely a McCartney, hiding behind the mask of Dr. John Watson. (Not that an artist can't occasionally break the mold: McCartney's Yesterday or Lennon's For the Benefit of Mr. Kite.)

By Timothy Miller at 2:47 PM No comments:

You've Got to Pitch a Pastiche or Two

I've stated ELSEWHERE that I haven't read many Holmes pastiches yet, and why. But I'm curious, and not yellow. I'm interested in what are--not necessarily your favorite--but the one or two pastiches you would foist upon your best friend to hook then on Holmes pastiches forever. Your friend may or may not have ever read any any of the canon.

I suppose I should stipulate that your choice should not feature Sherlock's brother, sister, wife, daughter or third cousin, at least not in a starring role, but should feature Sherlock Holmes himself, with or without Watson.

Nor, just in case you suspect me of dealing from the bottom of the deck, should your choice be my own pastiche, The Strange Case of Eliza Doolittle. (Frankly, I'm being selfish. Once I've hung up my own spurs, I want a nice list of the best pastiches to turn to.) 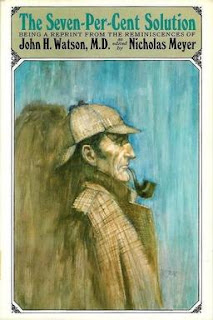 As for myself, I still adore the first Holmes pastiche I ever read, the inspiration for my own work, Nicholas Meyers' The Seven-Per-Cent Solution, which pairs the finest detectives of the 19th century, fictional and real,  Sherlock Holmes and Sigmund Freud, in a ripping yarn which also gives us insight into the shaping of Holmes's character.

So leave your choices in the comments (along with your reasons for them if you like) and I'll feature them in a future post. Thanks!