If you've been following along, you know that I compulsively google my book to see how it's faring in the wide world. And one thing I've noticed is that it's available in a goodly number of libraries, probably due to my starred review in Booklist, which is apparently the Bible for librarians ordering books. 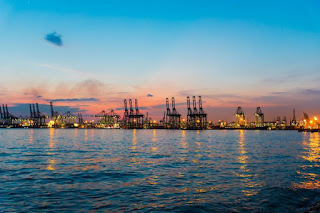 Now I will admit to you right up front that when I was writing the novel, my imaginary reader was not Singaporean. Which is, I suppose, a failure of the imagination. For there among the dusty e-shelves of Singapore sits my book, waiting for Singapore to discover it.

Let's assume, for the purposes of this fantasy, that Singapore has discovered it. Maybe not all of Singapore. Maybe, really, just one guy. He first came upon Sherlock Holmes when he was thirteen. He read the Canon in Chinese, and fell in love. So much so that he was determined to read it in the original English, so he learned the language backwords and forwords. His name is Charlie.

No, I don't know whether there's a single soul in Singapore (say that five times fast) named Charlie. I could do a little research and come up with a more appropriate name. Never do any research for your fantasies. It can only make them smaller.

So Charlie reads every Sherlock Holmes pastiche he can get his hands on, which is not many, because he doesn't make a load of dough and mainly has to depend on the National Library Board, which he has a fantasy of joining some day. Right now it consists of a dozen grim-faced old greybeards whose idea of good detective fiction is John Grisham.

Some day he'd actually like to write his own Sherlock Holmes pastiche. He figures Holmes made his way to Singapore during his three year hiatus. Maybe he worked the docks and secretly fought piracy for a year. At night Charlie can hear the creaking of

the wooden ships and the clash of swords. Maybe he had a sidekick he called Charlie, but whose name was really something far more appropriate.

But Charlie really latches on to my book. He's read it three times. He's told all his friends about it till they're bored to tears. He's even started a fan club, which has five members besides himself, four of whom don't know they're members, and one shy girl that he calls Irene. She really likes the book too--at least that's what she says.

Charlie would like to come to America, to meet me some day and shake my hand, maybe get an autograph. Maybe I would introduce him to my publisher (whom I've never even met) so he could show him his book, Sherlock Holmes and the Pirates. He's waiting to finish his book before he gets in touch with me. It could take a while, since he hasn't put down a word yet. 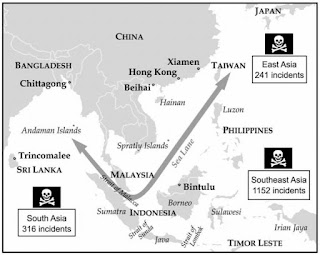 But he's got it all in his head. He's just letting it come to a boil. Keep an eye out for Charlie Singapore in your bookstores. Thank you, National Library Board.

By Timothy Miller at 1:39 PM No comments: 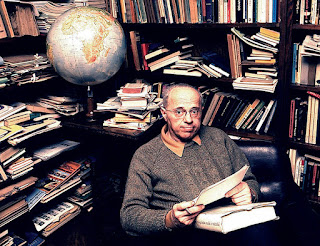 "The question of genres is simply unimportant for me, and very often I turn to different modes of writing. I want to write about things that interest me and in ways that interest me. One could simply say that I attempt certain mental experiments and try to create certain situational models."

By Timothy Miller at 9:37 AM No comments: 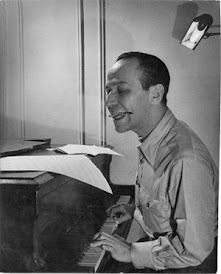 "I don’t write slowly, it’s just that I throw out fast."

By Timothy Miller at 1:05 AM No comments:

Raiders of the Lost Interview 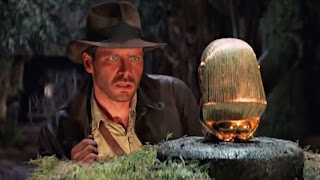 I just came across this, which I had almost forgotten about. This was an interview with a site which will remain unnamed, which for reasons unexplained they never published. So, hell--I'll publish it and you can still enjoy it.
Hello Timothy Miller! As you're a relative newcomer to most readers of historical fiction, please take a few moments to introduce yourself. In particular, tell us about your writing background before you took on your first novel.
Well, I took on my first novel the summer after first grade, but I only got as far as ten pages, so perhaps that doesn’t qualify.
[Note: these were the characters. Weird-O's, they were called.]

I got serious after college with poetry in traditional forms, which I would recommend to anyone wanting to learn how to write compactly—which, when your favorite writer is Dickens, is something you really need to learn. Then somewhere along the way I drifted into screenwriting, which taught me plot and structure. (In case you’re wondering, I was a theatre major in college, not a creative writing major, which is why I had to teach myself all these basics—slowly and painfully.) Then I felt I was ready to take on a novel—not this novel, but a children’s fantasy novel (sort of The Borrowers on acid), which I still hope may see the light of day. Then I thought I was ready to take on this novel.
For years, many writers have created Sherlock Holmes "mash ups" featuring Holmes encountering a wide range of both historical and fictitious figures from the Victorian and Edwardian periods. Why did you take the creative leap of having Holmes and Watson working on a mystery featuring the characters George Bernard Shaw created in his play, Pygmalion? And those of Robert Louis Stevenson?
My characters first bumped into each by accident other when I was teaching Italian in Milan. I had a young couple who were having trouble with English prepositions. There are something like six prepositions in Italian, and, if I recall rightly, about thirty-five in English, so you can imagine. So I decided to write a little fill-in-the-blank story centered around prepositions, and a detective story suggested itself. So there was Sherlock, well-known to even Italians, and a well-known villain, Hyde, and a well-known setting—27A Wimpole St., the home of Professor Higgins. I think in that one, Eliza murdered Higgins. The next twenty years were spent figuring out why my subconscious had suggested this particular grouping.
Tell us about the research you did to prepare for this story. Clearly, you explored a lot of details about London, the minutia of the time period, and, of course, the Sir Arthur Conan Doyle canon.
This was a little different from your ordinary historical novel, because most—not all—of the characters are fictional. (Although Holmes, due to the fervor of his fans, who play the Great Game, is almost real, like the Great Pumpkin.) Probably the most important thing was simply to read and re-read the Holmes canon for one thing—Watson’s voice. I didn’t want a word out of his mouth that didn’t sound like him. Certainly I had to consult contemporary maps, and currency, and train schedules, and fashions and a thousand details which actually became more important for cementing a fully dimensional world. But I was awfully lucky in my research. Did I need a member of nobility interested in Eliza? I found that the prince of Bavaria’s wife had just died. Did I need something to delay a train? There had been a plane crash near Oxford and both airmen had lost their lives. It was like dealing with a three-dimensional jigsaw puzzle.
Beyond Doyle, Shaw, and Stevenson, Who have been your literary influences? As I mentioned above, Dickens above all. For big hearty scoops of shameless pathos and gut-busting humor, he has no peer. Certainly Nicholas Meyer, whose Seven Per-Cent Solution opened the world of Holmes pastiches to me (and to, I suspect, half the writers working in the genre). And then Italo Calvino, who taught me the virtues of lightness.
What is next for Timothy Miller? Clearly, you didn't set us up for a sequel, so we should all expect some non-Holmes surprises down the road? And where can readers go to learn more about your novel and learn more about you? 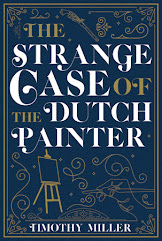 Actually I have another Holmes pastiche, set earlier, already taken by Seventh Street, and I’ve got a third in the oven—set later. After that, I think I’ll wander afield, although I have a couple of ideas which might include a cameo role for Holmes. Where can people go to learn more about me? Well, I’m a southerner, so I would say to drop by for coffee, but apparently there’s this pandemic thing going on, so that’s out. So I’ll try to keep folks up-to-date on my web page, https://www.thestrangecasesofsherlock.com/, and on Goodreads and Amazon. Thanks for reading!
By Timothy Miller at 1:48 AM No comments:

Lynda Dillon is a woman of impeccable taste. 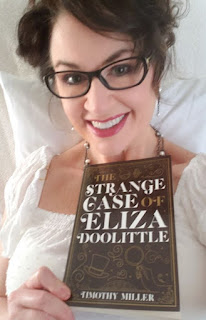 By Timothy Miller at 7:52 PM No comments: 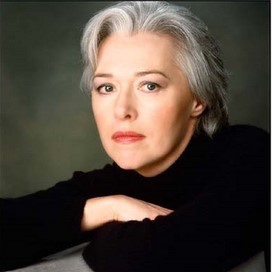 "C. S. Lewis said that all of the Narnia books began with the image of a faun in a snowy wood, carrying parcels. Or I might start with a character about which I know very little, just one or two things (for instance that, as a child, he got lost in some Roman ruins). The important thing is that the idea, whatever it is, has roots, that it goes deep down into the imagination, into the unconscious. Because if it has roots, then it will, with a bit of watering and careful pruning, grow into something quite interesting."

Shakedown, shake it up

I'm instituting a policy of  once a month harassment for my favorite cause: First Book. This is where I attempt to shake you down to help fund what I consider is one of the most essential (and most neglected) needs for poor kids: books. Schoolbooks, school supplies, and books to call their own. First Book seeks equity in education through a network of educators, a market for low and no-cost books, research and most important: action.

First Book reaches 5 million children annually, counts 500, 000 educators in its membership, and has thus far distributed 200 million books and resources. A good start, but so much more is needed.

Today's young readers are tomorrow's informed citizens. If you can, consider giving.

To give, and for full information, click here or up on First Book in the navigation menu. Thanks.

By Timothy Miller at 6:53 PM No comments:

I think I've come up with the plot for my next novel. 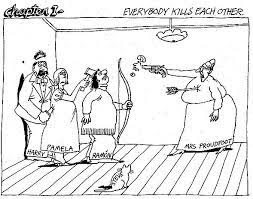 Thanks to the great B. Kliban.

By Timothy Miller at 8:41 PM No comments:

Email ThisBlogThis!Share to TwitterShare to FacebookShare to Pinterest
Labels: humor

I would like to unveil for you the cover of my second novel due to be released (tentatively) in January of 2022, The Strange Case of the Dutch Painter. I don't want to say too much about it right now. Suffice it to say that Sherlock Holmes investigates the murder of Vincent van Gogh.

By Timothy Miller at 3:52 PM No comments: 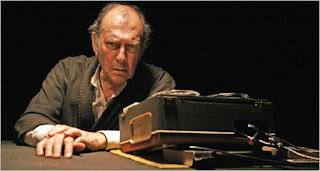 This time for sure!  I've come up with my million dollar idea. I'm going to start a new antisocial networking site I shall call Pinteresque, where everybody posts moody, meaningful silences.
By Timothy Miller at 7:01 PM No comments: